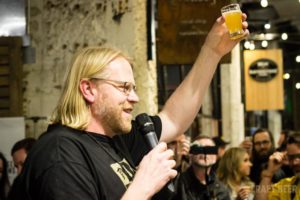 Joe Wiebe is the producer of Victoria Beer Week. He loves beer and hopes you’ll come cheers with him during the event.

The week kicks off on Friday, March 2 with Lift Off!, a special night at the Victoria Public Market where a dozen brand new beers are launched by some of B.C.’s best breweries, including one from Spinnakers, which dates back to 1984 when it was the first brewpub to open in Canada, alongside a beer from Small Block Brewing, the newest brewery in B.C. that is just opening in Duncan.

On Saturday, March 3, brewmasters and craft beer fans mingle at the Brewmasters Brunch at Swans Public House. Later that evening is Fishing for Beer, which features fish and seafood dishes as well as an optional crab boil plate, all paired with delicious craft beer.

Sunday is all about education: Beer School features two classes at Swans Brewery and the Homebrewing Workshop takes place at Category 12 Brewing.

Beer lovers have two options on Monday, March 5. If they love pizza and beer they can attend Beer, Pizza and Gelato at Pizzeria Prima Strada. Or if they love a good trivia night they can participate in the Ultimate Craft Beer Quiz at Northern Quarter, hosted by the inimitable Benji Duke.

The rest of the week takes place at the Victoria Public Market. Taco Tuesday features delicious beer and taco pairings, while Beer, Cheese, More Beer on Wednesday, March 7 features two sessions (7pm & 9pm) where attendees can samples different cheeses alongside craft beer samples. Thursday night is All About the Wood, a special evening featuring rare and exclusive barrel-aged beers from some of BC’s finest breweries. At Friday Night Casks, there will be more than 25 different cask-conditioned beers along with cider and mead.

And then Victoria Beer Week closes on Saturday, March 10 with two different events. In the afternoon, you can go on the Sooke Beer Run, visiting three breweries in Sooke, courtesy of West Coast Brewery Tours. And then that evening is Hoppy Birthday, a special party celebrating Five Years of Cheers that will include a live performance by the Susannah Adams Trio. This is a fun and formal event, and it’s all inclusive: beer samples and food are part of the ticket, and ticket holders will leave with a special, commemorative glass at the end of the night.

Tickets are sold through Ticket Rocket. Check out all the events on our site below!