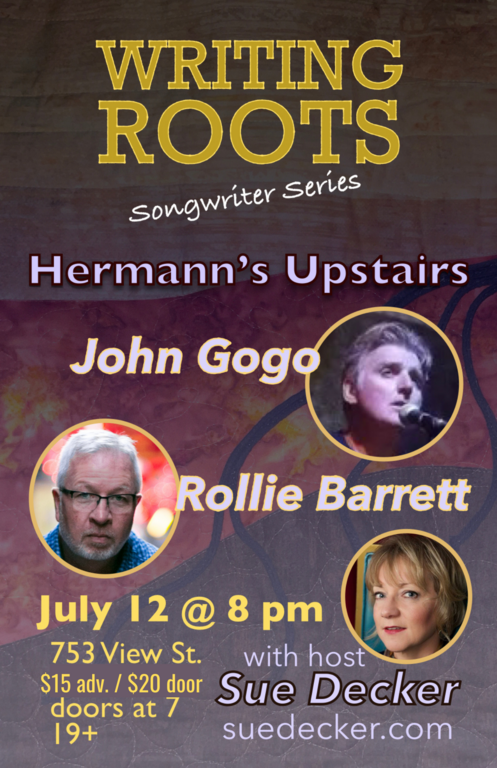 Writing Roots brings great songwriters together to dig into the influences and inspirations behind
their songs. Hosted by Sue Decker, this intimate evening promises to be a treat for roots music
lovers. Feature artists for the inaugural edition of this songwriter-in-the-round series are Rollie
Barrett and John Gogo.

Western Canadian folksinger/songwriter & actor John Gogo is getting ready to record his 6th
full length album of original songs this summer. His previous release ‘Coal & Wood (Revisited)’
was a return to his early ‘folk singer’ days, and he’s looking forward to singing his brand new
songs about the people, places and historical events of Canada’s western islands.

Fuse the heartland stylings of Bob Seger and John Mellencamp with the introspective lyricism of
David Gray and Ray Lamontagne, and you will begin to see a common thread in the music of
Roland Barrett. His latest full-length recording effort, “Ancient Wave” (UREL), recorded and
produced by Canadian music industry bastion Leeroy Stagger, has truly refined his musical
identity.

Sue Decker’s soulful voice, warm connection with the audience, and ‘outlaw country’
songwriting sensibility make for a powerful combination. In 2019, Sue released her debut studio
album ‘Outskirts of Love’ to international acclaim. “We have proof here that Ry Cooder and
Lucinda Williams once hooked up. Decker is a mind-blowing talent. Simply not to be missed.”
(Midwest Record). With her next recording in the works, Sue is thrilled to trade new material and
old favourites with Rollie and John.