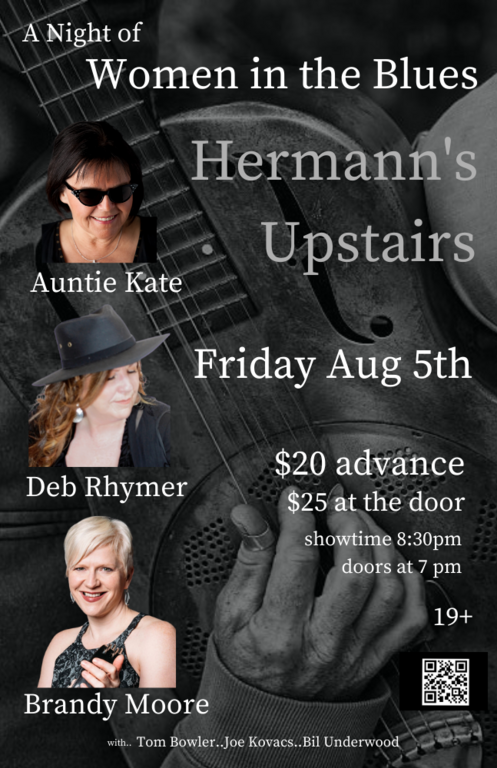 Women In The Blues

Three great singers of the blues in one night!

DEB RHYMER
Deb was born and raised in Victoria, British Columbia and made her debut as a vocalist with the rock band Hostage. In 1997 she began fronting the blues band No Fixed Address. Her love of the blues had begun! Known for her dynamic voice and unique bluesy style, Deb has had the opportunity to work with some of Canada’s best musicians. Her first CD was released in 2006 and received excellent reviews. The new album – Don’t Wait Up features Deb’s original songs and has received rave reviews and continue to dominate the music charts. Deb has been featured for many years at the various clubs and festivals and the Deb Rhymer Band hosts one of the most popular and long standing blues jams in the Pacific Northwest – Sunday Blues Services. Deb is also a founding member of the Victoria Blues Society.

BRANDY MOORE
Brandy Moore’s rich, soulful voice connects you to the emotion in her music. She’s been performing live since the early 90’s for private events, venues and festivals, and has released five independent CDs to date. Her latest “Real Good Love” was recorded in Nashville with several industry veterans including guitarist George Marinelli (Bonnie Raitt/Bruce Hornsby & the Range) and multiple Grammy award-winning saxophonist Phil Kenzie (McCartney/The Eagles). Brandy loves to sing a great song from any genre – soul, jazz, R&B, pop, singer/songwriter, folk – and this year she’s just looking forward to performing live as much as she can!

AUNTIE KATE
“Auntie Kate hits the stage like a barely controlled force of nature, rocking and kicking out a powerful blues routine honed in the clubs of Western Canada. Originally from Saltspring Island, but calling Victoria, or anywhere she is performing, home, she is a charismatic singer with a style all her own.
On stage, despite her small stature, she appears larger than life. Outfitted with dark glasses and an unabashed stage presence, she takes command of her audiences with her powerful hard-edged blues vocals.”