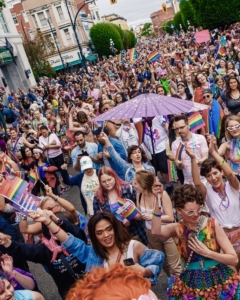 It’s time to come out and show the Pride In You! Following two years of cancellations to keep our communities safe from COVID-19, the 2022 Victoria Pride Parade returns to its familiar in-person format.

This year’s parade is bigger than ever, featuring over 100 colourful entries, thousands of marchers and 40,000+ spectators demonstrating their Pride and solidarity with 2SLGBTQIA+ communities.

After the parade, we invite you to join us at MacDonald Park for the Victoria Pride Festival in the Park.