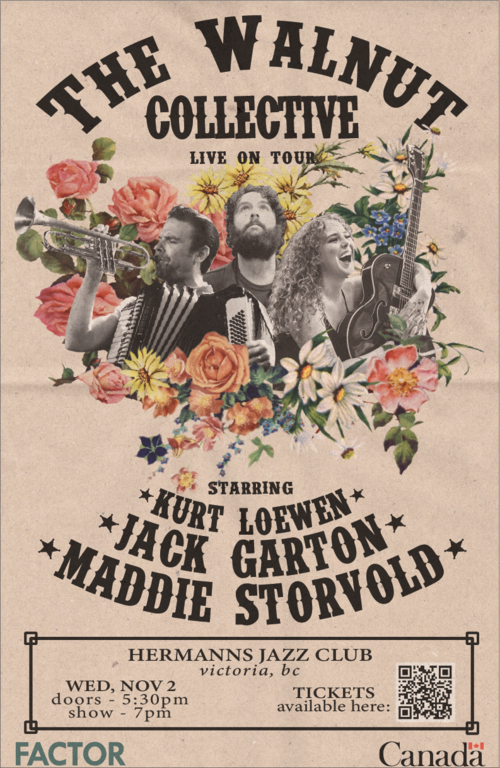 With the goal of “uniting the hippies and the cowboys” as Willie Nelson once did decades ago, Storvold is quickly finding her sure-footing in the shifting landscape at the intersection of Singer-Songwriter & Psych-Folk. In 2019, she won CTV’s The Launch, receiving the opportunity to record and release a ballad, “Don’t Say You Love Me”, written and produced by Bryan Adams. The single shot to #1 on the country charts in less than 3 hours, and peaked at #3 on the overall charts, surpassing Lady Gaga and P!nk. Her tenure on The Launch, and the impact of the single only supplemented her already-acclaimed catalog of mature songs and dedicated fanbase in Western Canada.
PRESS:
“Seasoned wit and sweetly forlorn wisdom, just sugar-coated enough to be addictive… Storvold’s songs live wonderfully in the messes, smells and snapshots of a troubadour’s tour brought to life for three or four honest minutes.”
— ROGER LEVESQUE, EDMONTON JOURNAL

“Solid folk in the Canadian tradition. Storvold’s melody is playfully tuneful and yet she sounds vulnerable at the same time, much like (you guessed it) Joni Mitchell”
— MARK ANTHONY BRENNAN, RIDE THE TEMPO

“Storvold grapples with the challenge of integrating a storybook-style big break into a textured and intelligent catalog consisting of her previous releases… soon to be joined by the fruits of her hours spent with the guitar she keeps next to her bed and the notebook she carries everywhere”
— JOE HARTFEIL, BEATROUTE