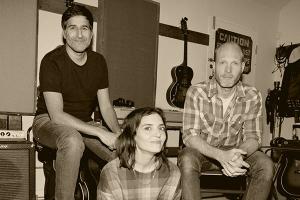 Led by singer/guitarist and Alberta native Nils Edenloff, the Rural Alberta Advantage are an anthemic indie folk-rock trio from Toronto, Canada who balance rhythmic intensity with expansive melodies. They scored a Top 30 independent album with their Polaris Prize-nominated sophomore release, Departing, in 2011. Subsequent efforts Mended with Gold (2014), The Wild (2017), and The Rise (2022) continued to see regional success, while frequently appearing on Billboard’s U.S. Heatseekers chart.

Singer/guitarist Nils Edenloff, a native of Alberta, Canada, founded the trio in 2005 with drummer Paul Banwatt and bassist/keyboardist Amy Cole. The group soon self-released a demo recording, followed by The Rural Alberta Advantage EP in 2006. Two years later they made their full-length debut with Hometowns. While little was known at the time of its release, Hometowns got a big boost when online music retailers championed the album. The band got another boost in March 2009 when they played a high-profile showcase at South by Southwest in Austin, Texas alongside one of the festival’s most anticipated bands, Grizzly Bear. The buzz about the Rural Alberta Advantage reached the point where Omaha-based indie label Saddle Creek Records picked up Hometowns for reissue in 2009. The group’s much-anticipated second studio album, Departing, arrived in March 2011, and earned the group a prestigious Polaris Music Prize nomination. It was followed by Mended with Gold in 2014, on Saddle Creek — both efforts landed on Billboard’s independent and Heatseekers album charts. In September 2016, Cole left the group to pursue other projects. Robin Hatch joined the lineup in time to help test new material on the road for album number four, The Wild, which included the rousing singles “White Lights” and “Beacon Hill,” the latter of which was inspired by the 2016 Fort McMurray wildfires. Cole re-joined the group in 2018, and in 2022 the trio issued The Rise, the first installment of a planned three-EP collection.