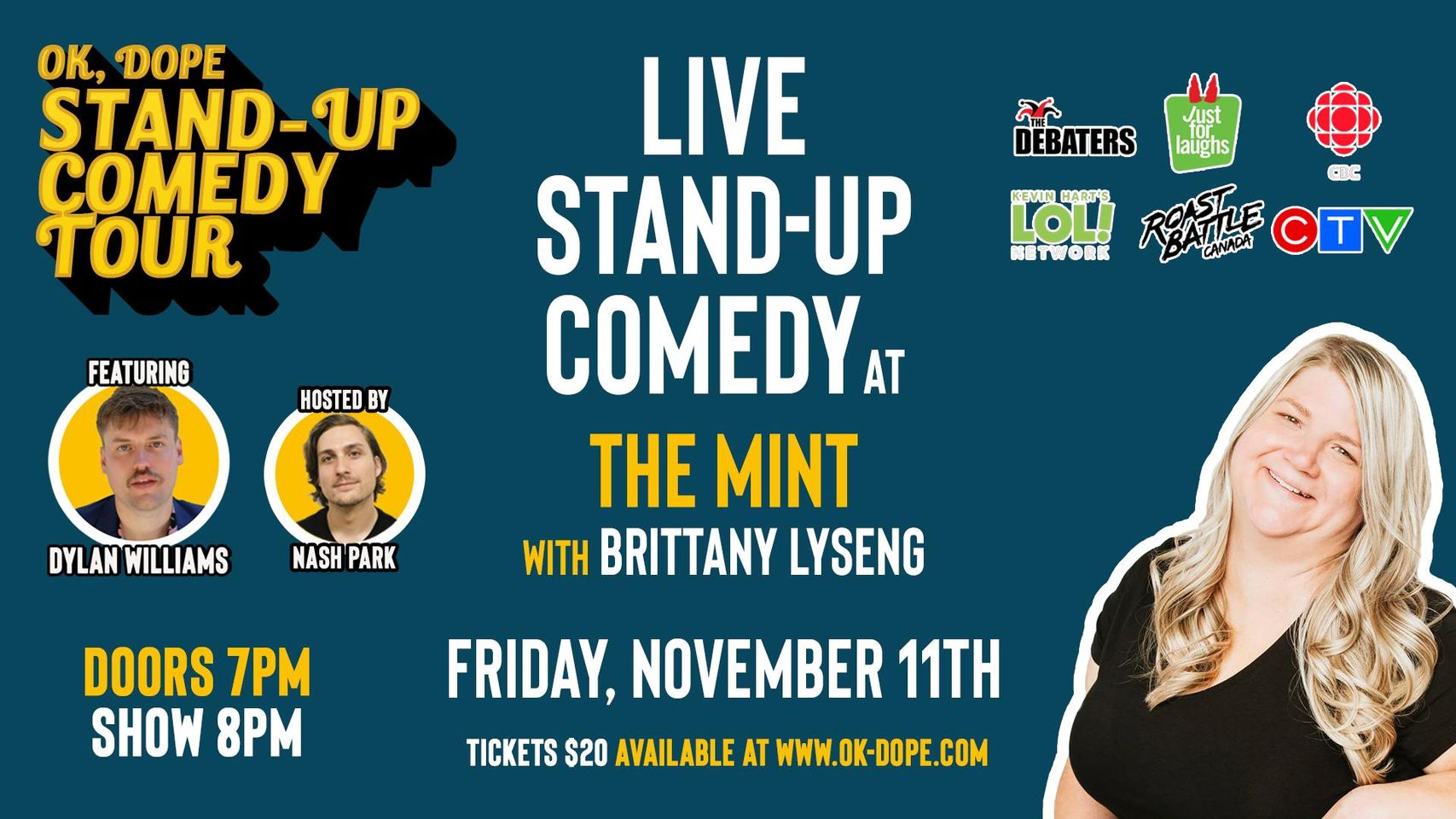 The OK, DOPE Stand-up Comedy Tour live at The Mint with Brittany Lyseng

The OK, DOPE Stand-up Comedy Tour live at The Mint with Brittany Lyseng
Doors: 7:00PM | Show: 8:00PM
OK, DOPE is proud to present Brittany Lyseng live at The Mint Friday, November 11th. Featuring Dylan Williams and Nash Park.
Featuring
Brittany Lyseng
Dylan Williams
Nash Park
Brittany Lyseng
Brittany Lyseng is a nationally touring Stand-Up Comedian, Writer and Podcaster. Her comedy career began after 12 years as a tradesman with the desire to lift less and laugh more, and in turn has become one of the Canadian industry’s fastest rising stars. She has been seen on CTV’s Roast Battles Canada, CBC’s New Wave of Stand-Up Comedy, Kevin Hart’s LOL Network, and CTV’s The Stand-Up Show with Jon Dore, as well as making appearances on CBC Radio’s The Debaters. Released in 2019, her first album Going Up debuted at #1 on iTunes and was followed with appearances at three Just For Laughs festivals (Montreal, JFL 42 in Toronto, and Vancouver’s JFL Northwest). Most recently she was featured in Reader’s Digest magazine, and was graced with a 2022 Canadian Screen Awards nomination.
Dylan Williams
Dylan Williams is a rising star in the Canadian comedy circuit. He was a performer at Just For Laughs Vancouver and recently was a finalist at House of Comedy’s funniest person with a day job contest. Dylan opened for Ivan Decker and Dino Archie at “The Pretty Good Comedy Festival” and he is a regular at Heckler’s Comedy Club in his hometown of Victoria BC. He just finished a four day run at Rifflandia Music Festival and is excited to share some of his infectious energy with you! An off kilter storyteller with a unique perspective, Dylan is sure to entertain!
Nash Park
Nash Park is an up-and-coming stand-up comedian born in the small town in northern BC. After high school Nash moved to Victoria BC and spent years chasing creative projects until he discovered his love for stand-up comedy. After just one taste, he was completely hooked. Since then Nash has been regularly performing his high-energy, hard-hitting stand-up to crowds all around Victoria and Vancouver Island. Nash is also behind OK, DOPE, a comedy collective that creates and produces live shows, podcasts, and comedic content. OK,DOPE’s flagship production is The Late Night Show with Nash Park, a live monthly show that combines stand-up, improv, and sketch all within the structure of a classic late night talk show. Off stage you can hear him as one half of the OK, DOPE Podcast.