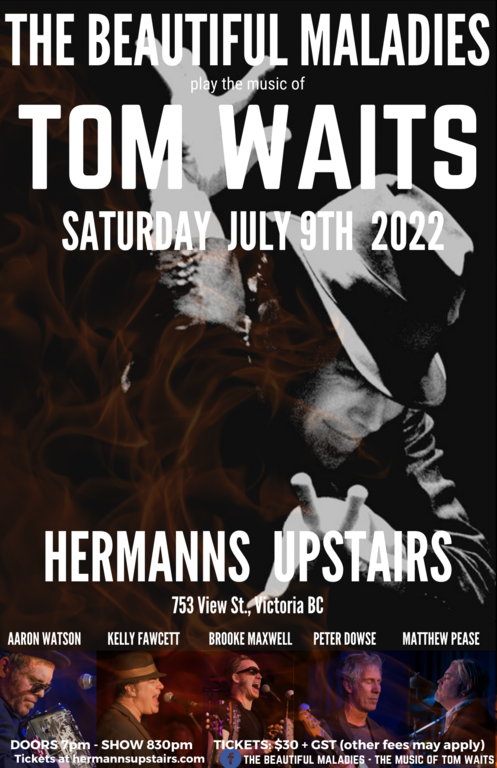 The Beautiful Maladies: The Music of Tom Waits

Based out of Victoria, BC, The Beautiful Maladies have been bringing the music of Tom Waits to live audiences since 2015. With continual sold-out shows at Hermann’s Jazz Club, the band is now touring Vancouver Island, with eyes on the mainland.

The band is comprised of Kelly Fawcett, Aaron Watson, Brooke Maxwell, Peter Dowse and Matt Pease, who each bring their own individual loves and interpretations of Waits’ music to each show. This is not simply a band impersonating an amazing Tom Waits’ performance, but a group of seasoned pro musicians, who each showcase their own talents through this incredible music.

Originally hailing from Halifax NS, Kelly Fawcett brings a raw, bluesy feel to the group with his intricate guitar playing, soulful singing, and occasional runs of beat poetry. A well-known presence in Canadian blues circles, he cut his teeth playing with the Dutch Mason Band. As a coveted sideman and leader of his own projects, he has extensively toured North America, with international sojourns to Asia and Europe.
Aaron Watson brings his incredible range of musical skills to the mix – in addition to vocals, button accordion, harmonica, guitar and bass clarinet, he adds the surreal and magical sound of the musical saw. He has performed extensively throughout Japan, accompanied dance groups in Africa and has recorded with vocal ensembles, accordion orchestras, gypsy jazz, country, punk, indy, rock, electronic and avant-garde groups.

Brooke Maxwell joins the front line with vocals, piano, pump organ, some saxophone and a little percussion. With a background in jazz, swing and theatre, and a love for the absurd, he gravitates more towards Waits’ later work. Brooke is also a composer/arranger and co-creator of the multi-award winning cult Canadian musical, Ride the Cyclone.

Second-generation musician, Matt Pease is the percussion engine for the band. One of Victoria’s busiest drummers, Matt has been a foundation for variety of Victoria bands, in a crazy range of styles, from grunge to marching band to 1920’s swing to country and garage rock. So far, this is the only ensemble that has encouraged him to play bones, the brake drum and a bucket of chains. So far…

Peter Dowse is probably one of the heaviest grooving bass players this side of New York. Hailing originally from the UK and later Montreal, he earned his stripes working the Chitlin circuit playing jazz, funk, disco, Motown and latin music, collaborating with greats artists from Omar Hakim to Leonard Cohen and producing records.

The Beautiful Maladies are five of Victoria’s most celebrated musicians, playing some of the greatest American music ever written. Their show is an eclectic celebration of Tom Waits’ music, from his moody ballads to raw back-porch gospel, meandering through the stinging blues and exotic European melancholy, with the occasional trip to crazy town..