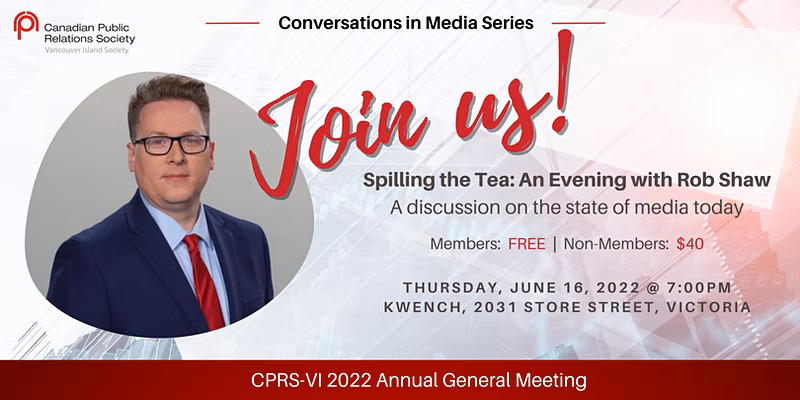 Spilling the Tea: An Evening with Rob Shaw

The second session in our Conversations in Media series, this event will be a discussion on the state of the media today.

What is the Tea in B.C. politics? What has it been like to cover and uncover some of B.C.’s biggest scandals and resignations? What is it like reporting in today’s media climate? Why is the truth more important now than ever?

Rob has chronicled the citizen uprising on the Harmonized Sales Tax that brought down Gordon Campbell, the rise and fall of Christy Clark’s B.C. Liberals and the historic power-sharing deal between the B.C. Greens and NDP first put John Horgan into power.

Prior to joining CHEK News, Rob reported for the Vancouver Sun, the Victoria Times Colonist and the Globe and Mail newspapers. He co-authored the national bestselling book A Matter of Confidence, which told the inside stories of the last decade in B.C. politics. His work has been published in virtually every major Canadian newspaper, and he’s a frequent guest political commentator on radio and TV stations across the country.

From the Island, four years at Ryerson University in Toronto was followed by stints at the National Post, Globe and Mail and Vancouver Province. Before Rob returned to the Island for the Times Colonist – where he was promptly assigned to cover the glamorous beat of sewage treatment. It turned out to be a blessing in disguise, as the emergence of Mr. Floatie, the costumed sewage treatment crusader, led to several years of fascinating and interesting stories that ultimately paved the way for the modern treatment system Greater Victoria enjoys today.