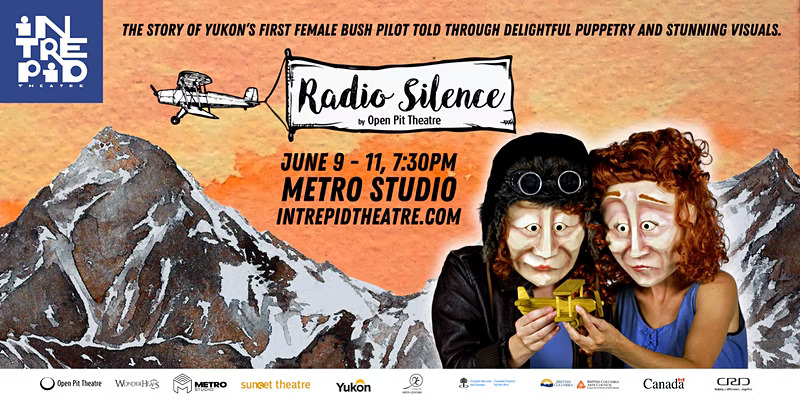 Part of the Intrepid Presents Series: an Open Pit Theatre production, created in collaboration with the Wonderheads.

Part of the Intrepid Presents Series

Radio Silence is a fictional tale that takes place in Dawson City, Yukon in the 1920s, on the traditional territory of the Tr’ondek Hwech’in. The seasons are turning and the Yukon’s first female bush pilot has gone missing. In a whimsical journey of self-discovery, her twin sister sets out to find her. Charismatic and profoundly moving, Radio Silence features signature masks by the Wonderheads, delightful puppetry, and stunning landscapes by Yukon visual artists. Radio Silence is a funny, heartwarming story not to be missed.

An Open Pit Theatre production, created in collaboration with the Wonderheads, and developed with support from the Yukon Arts Centre and Sunset Theatre.

Open Pit Theatre is a Yukon physical theatre company specializing in unique northern storytelling. Their highly physical work features the voices, stories, and tales of the North which audiences have described as “the best theatre I have ever seen” and “brimming with humanity and heart” (Times Colonist). You may have seen their other shows: Busted Up: A Yukon Story (YAC, KIAC, Belfry Theatre), The Trophy Hunt (Victoria Fringe Festival, Fan Tan Alley) and Leave a Message (après le bip) as part of Nakai Theatre’s 2012 Pivot Festival. Open Pit Theatre’s northern stories will make you laugh at the same time as cry, but undoubtedly leave the theatre a different person for having been there.