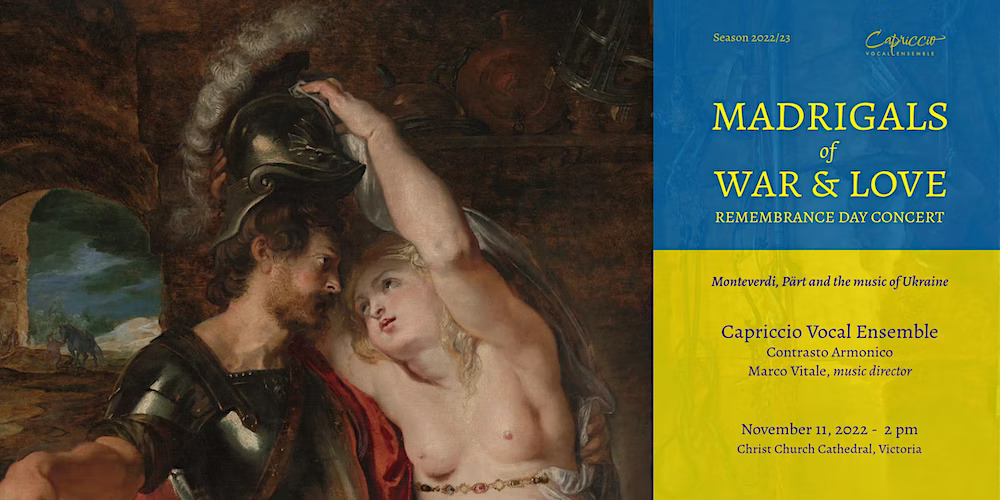 Madrigals of War and Love

For our traditional Remembrance Day concert on November 11th, we have constructed a program that allows us to honour the sacrifices of those who have died in war, and fled war, including the recent conflict in Ukraine.

Monteverdi’s Madrigals of War and Love depict the metaphorical combats between men and women on the “battlefield” of romance and love. Set to texts by some of the greatest Renaissance and 17 th C poets, they contain some of the most daring vocal writing of the early Baroque era. We contrast this early baroque music with works from Eastern Europe. We pay tribute to the people of Ukraine at this tragic time by singing three songs celebrating Ukrainian culture, including the well-known Testament, the words of which are by Ukraine’s most beloved poet, Taras Schevchenko. The concert concludes with three works by contemporary Estonian composer, Arvo Pärt, including the haunting Da Pacem Domine.

We are grateful for the support of the Victoria Foundation and the CRD in the organization of this concert and encourage all those attending to in turn support the refugees now living amongst us by make a donation to HELP UKRAINE vancouver island or a similar charity.