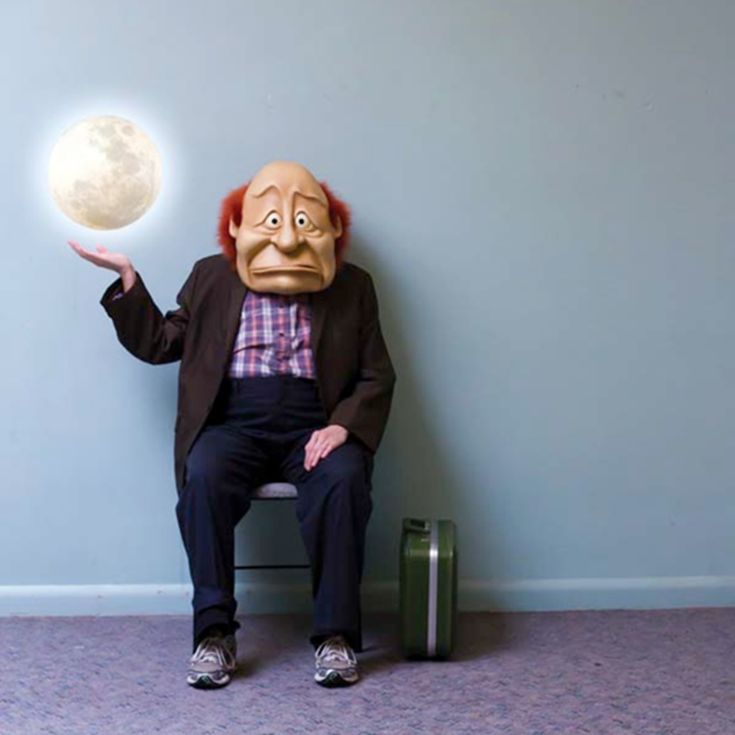 Acclaimed theatrical imagineers the WONDERHEADS bring you a love story that whisks a man to the moon and back!

Francis, a lonely janitor who is plagued by isolation and tickled by whispers of childhood imagination, has hit rock bottom and discovers that he has nowhere to go…but up. And up. And up! But will plucking the moon from the sky bring him the love he is searching for?

LOON is performed in full-face mask, a form so magical you will forget your age and marvel in childlike delight. Wordless and whimsical, it has been described by audiences as watching a living cartoon, or live-action Pixar. Winner of four Critics’ Choice Awards, three Best of Fest Awards, and described by the CBC as “Pure magic”, LOON has been delighting audiences across the continent since 2011. A beautifully surprising mix of physical theatre, comedy, and pathos, LOON is a love story the likes of which you’ve never seen.

LOON is recommended for ages 10–adult.

WONDERHEADS is a multi-award winning physical theatre company specializing in mask performance and exquisite visual storytelling. Their work is performed in full-facemask, a wordless, whimsical form which audiences have described as watching living animation and the CBC calls “Utter magic.” In stories that are at turns hilarious and heartwarming, WONDERHEADS make it their business to step beyond words and ignite the imaginations and hearts of every audience member.