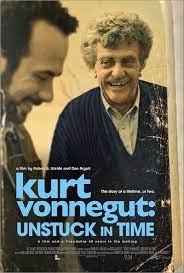 40 years in the making, this is the first feature documentary to chronicle the life of Kurt Vonnegut, the legendary American author whose dark comic talent and urgent moral vision still capture our imagination today. Told through the prism of his long friendship with Oscar-nominated filmmaker Robert Weide, who began shooting Vonnegut as far back as 1988, the film spans everything from his childhood in Indiana and experience as a prisoner of war, to his long years as a struggling writer, which eventually led to superstardom with the publication of his lightning-bolt anti-war novel Slaughterhouse-Five. Featuring rare interviews and narration by actor Sam Waterston, Kurt Vonnegut: Unstuck in Time is both a compelling tribute and essential introduction for the uninitiated.