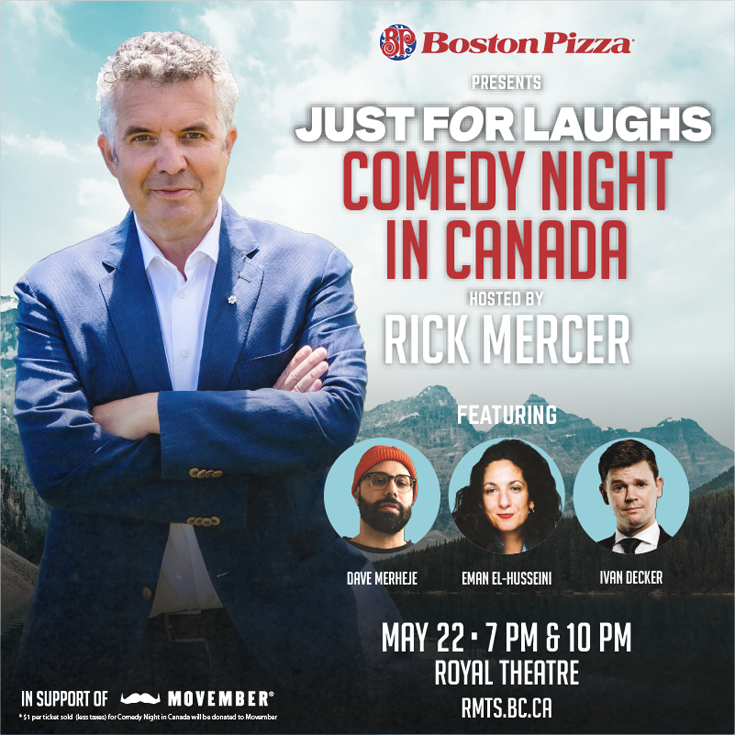 Just For Laughs is excited to announce the return of the Just For Laughs Comedy Tour! Following his successful turn as host in 2019, Canadian comedy legend Rick Mercer returns to lead a stellar line-up of Canada’s most hilarious and diverse comedians. This 19th edition, titled Just For Laughs Comedy Night in Canada, will feature co-star of STARZ’s Ramy Dave Merheje, Just For Laughs Festival favourite Eman El-Husseini, and 2018 Juno award winner Ivan Decker.

Rick Mercer is a Canadian comedian, television personality, political satirist, and author. He is best known for his work on the CBC Television comedy shows This Hour Has 22 Minutes, Made In Canada, and Rick Mercer Report.

Mercer has received nearly 30 Gemini Awards and Canadian Screen awards for his work on television, and his CBC Television special Talking To Americans remains the highest rated Canadian comedy special ever with 2.7 million viewers. Mercer is the author of four books, all of which have been national best sellers, and has also written for Time, Maclean’s, The Globe and Mail, and The National Post. His newest book – Talking to Canadians: A Memoir – is available now.

He is a recipient of the Governor Generals Performing Arts Award, an Officer of the Order of Canada, and a proud native of St. John’s, Newfoundland.

Dave co-stars alongside Ramy Youssef and Mo Amer in the new, award winning comedy series Ramy on Hulu. As a stand up, Dave has made multiple appearances at the Just For Laughs Festival in Montreal, JFL42 in Toronto, the Winnipeg Comedy Festival, the Halifax Comedy Festival, the Melbourne International Comedy Festival in Australia, and tours clubs and theatres regularly. In 2018 Dave released his comedy special Good Friend Bad Grammar which is available on iTunes and Amazon Prime, and won the 2019 Juno Award for Comedy Album of the year. His most recent comedy special, Beautifully Manic, can be seen on Netflix as part of the series Comedians of the World.

Eman El-Husseini is a Canadian-Palestinian comedian currently living in NYC. She is a Just For Laughs favourite, and has performed as part of their festivals in Toronto, Australia, and her hometown of Montreal. She headlines regularly across Canada, and opens for Patton Oswalt. She has recorded two comedy albums, Unveiled and Handsome Daughter, both of which can be heard on SiriusXM Radio.

In addition to her solo work, she is one half of The El-Salomons – a comedy duo comprised of her and her wife. Together they mix jokes and stories inspired by their relationship with observational humour about love in general. They have travelled everywhere to perform, from the San Francisco Sketchfest to the Boston Women in Comedy Festival – and even to the arctic!

Ivan Decker, originally from Vancouver, now Los Angeles- based, is a writer, standup comic and actor, known for his sharp, polished, and multi-layered observational comedy. You can see his recent comedy special on Netflix, as part of the Comedians of the World series. Ivan was named a “Comic To Watch” by TBS at the New York Comedy Festival in 2017, and subsequently made his American television debut on “Conan.” Ivan’s debut comedy album “I Wanted to be a Dinosaur” was the recipient of the 2018 JUNO award for “Comedy Album of the Year” which can be heard on all major streaming platforms, including iTunes. Ivan can also be seen and heard on the popular CBC radio program “The Debaters.” Ivan shot a half hour comedy special for Netflix at the 2018 Montreal Just for Laughs Festival.