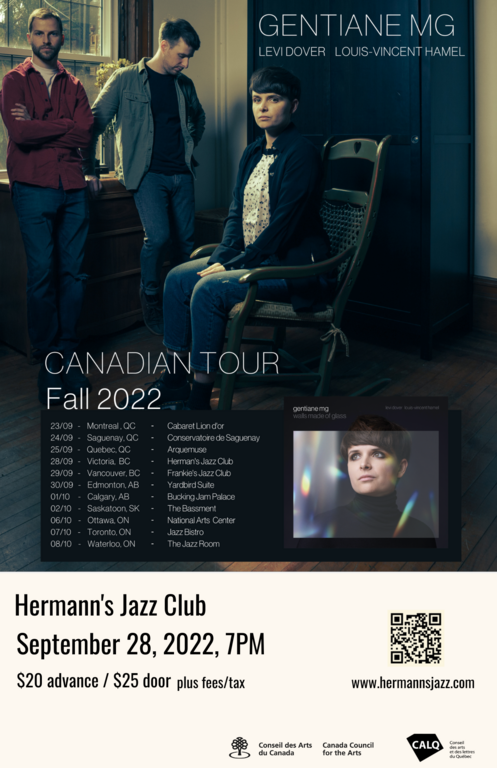 Award winning pianist and composer Gentiane MG perceives music, above all, as a powerful
means of expression. Her compositions come together in a deeply personal universe filled with
contrasting colours. She is joined by bassist Levi Dover and drummer Louis-Vincent Hamel, two
pillars of the Canadian creative jazz scene, who contribute their original voices to her music.
Over several years of performing and touring together, the band has developed its own language,
transcending genre and striving for creative freedom.
Gentiane MG has released two albums with her trio, Eternal Cycle (2017) and Wonderland
(2019) and releases Walls Made of Glass on September 23, 2022. She has received several
awards for her work with her trio, including the OPUS Award for Discovery of the Year in 2020,
the CBC/Radio-Canada Jazz Award in 2018 and the François-Marcaurelle de la GMMQ Award
in 2017. Eternal Cycle was highlighted by CBC Music as one of 10 outstanding Canadian jazz
albums of 2017.
MG’s compositions reflect her early development as a classical pianist as well as her background
as a jazz pianist, incorporating the aesthetics of impressionism with the improvisational approach
and rhythmic sensibility of contemporary jazz. From a more personal perspective, her most
recent repertoire was born from a long search for meaning.
“Walls Made of Glass is composed of music inspired by a recent change in my perception of the
world outside myself. I started to feel the power of life through objects, animals, plants and
sounds in a way that I had never truly been able to before. Their ephemeral quality became
apparent to me, momentarily creating tangible magic, profoundness, beauty, and meaning. Music
has an incredibly strong power to keep moments alive from reality that are long gone, reflecting
their beauty into the world endlessly.”