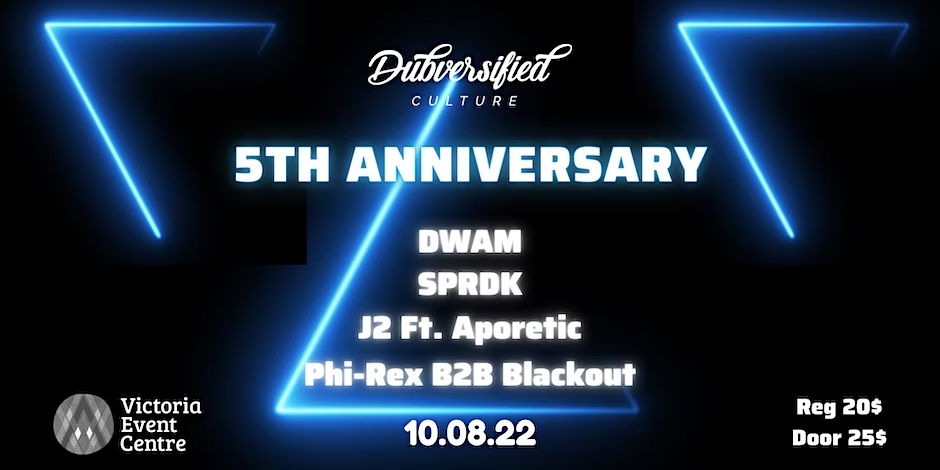 🌿 We gather in Metulia (Victoria, BC) on unceded and never-surrendered Lək̓ʷəŋən homelands. This acknowledgement is a reminder to act with love, respect, gratitude and accountability towards the land, water and people 🌿

It’s Dubversified Culture’s 5th birthday – we’re thrilled to celebrate with you by bringing prominent leaders of Victoria’s music and arts scene together for a west coast bass music showcase! A huge thank you to the attendees, artists, artisans, and organizers that have built Dubversified Culture from the grassroots up – our hearts are filled with gratitude for the continuous support and dedication of our community.

Please join us (19+) for an inclusive and immersive experience of soundsystem culture and community, stunning art and visuals, great energy and immaculate vibes:

Dubversified Culture does not condone or permit abusive, appropriative, harmful, oppressive, inappropriate or violent behaviour of any kind. Please be sure to:

♊️ Speak and behave with kindness, compassion and consideration

♋️ Know your limit, play within it

Originally from Québec, @blackooout started mixing house and hip hop in 2010. Blackout has rocked crowds of 5000, and his underground flavor gets bodies moving whenever he plays. He also participated and DJ Battle such as Red Bull 3style. Blackout’s career started in 2010 on Vinyl mixing Hip-hop. Now you can truly feel his past through his taste of music when it comes to the G-House, breaks & Beats he plays, or the Scratch routine he adds to his 87’s to 110’s BPM Bass music. Blackout also founded an underground Community called DUBVERSIFIED CULTURE. A Brand designed to support local West coast Bass artists and create bridges with other Dub/House Scene around the world. Dubversified Culture’s most popular concept is the bi-monthly series of events @ Copper Owl called, BASS HIVE

Born and raised on Vancouver Island, Phi-Rex fell in love with electronic music and west coast rave culture at a very young age. From going to bush raves to playing clubs and festivals, he has established himself as a local vibe selekta ranging from house to deep dub to dnb. Studious in his art, he is not only obsessed with finding the latest and greatest in music but also to learn the origins and culture behind the music. His love for the scene resulted in him being a founding member of a 4-year project that created a slew of club and festival event productions as well as running a music & arts studio (RIP Submersive Studios). Due to this, he has hosted and shared the stage with a variety of local and international favorites spanning many genres.

Originally from Toronto, now based out of Victoria, the eclectic producer/DJ, Lucas Rivas, otherwise known as DWAM specializes in a style of bass music that opens portals between the swagger of hip hop blended seamlessly with all the flavours that bass music has to offer. His productions have been played on the biggest stages in bass music. He has released on Mat Zo’s imprint MAD ZOO and has been supported by the likes of Excision, Mat Zo, Thys (Noisia), Zeds Dead, and more. Although it was a silent year for DWAM, he’s leveling up in 2022.

J2 is a multi-media art duo:

Don’t let the name fool you – BB Stepz is a DJ, performer, dancer and artist made for the stage with big shoes to fill. Your favourite flailing space fairy may be small in stature, but she’s massive in tunes.

Aporetic (Helena Arbuckle) is a classically trained vocalist, songwriter, performer, MC and (aspiring) DJ who remixes deep bass music with her own musical stylings. Aporetic speaks to our collective human experience with lyrics that call the status quo into question and our generation into action. Aporetic has been leading the Victoria, BC grassroots music and arts community since 2018, working behind the scenes to bring inclusivity, transparency and professionalism to underground event organizations. Prior to her role as Co-owner and Executive Director of Dubversified Culture, she was the Artistic Director and Vice-President of Submersive Studios.

A staple of the Victoria bass community, Sporradik has been showcasing the deeper side of bass music at shows and festivals across the west coast of BC for nearly a decade, seducing deep heads with carefully curated selections of lurky dubs, classy wobblers, and heavyweight tunes.

💜 Dubversified Culture (established in 2017) is a community-driven music, art and event organization led by a diverse team of experienced professionals. Our mission is to encourage creative expression and community connection through providing inclusive and immersive events. Our vision is of a safe, accountable, responsible and transparent music and arts scene in Victoria, BC that supports musicians, artists, artisans and the local economy.