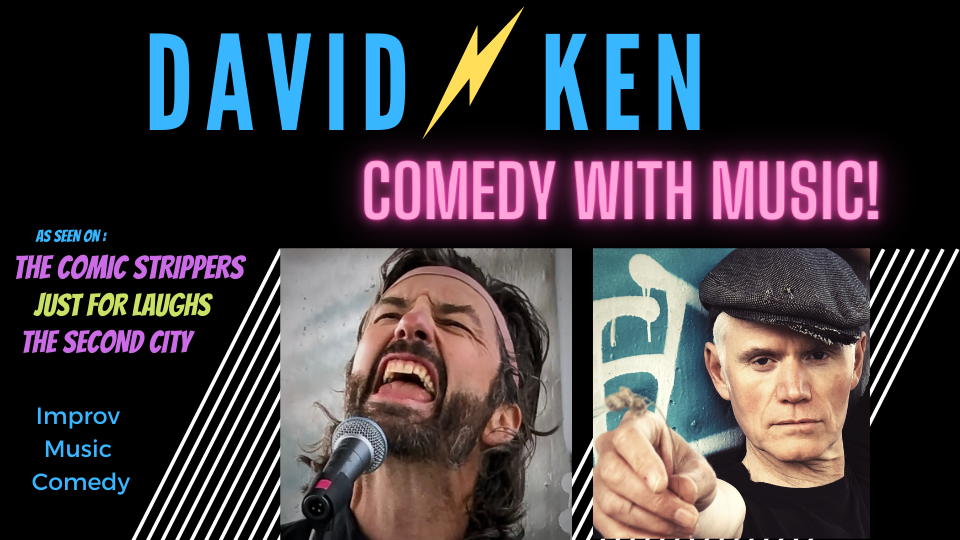 David and Ken: Comedy with Music!

David and Ken: Comedy with Music!

We talk, you talk, we sing about it.

“David and Ken: Comedy with Music!” is an audience-fueled conversational comedy show with real stories and character-driven improv scenes combined with hilarious, spontaneous songs and world-class guitar playing. Join this playful-absurdist-adventure that will leave you feeling joyful and connected!

David Milchard and Ken Lawson are award-winning improvisers, musicians, and actors. Be prepared to laugh as they improvise songs, characters, and scenes inspired by audience suggestions! Join in on the fun with this hilariously interactive show and create the night of comedy and music you’ve always wanted!

Think: Whose Line is it Anyways meets Flight of the Conchords and Tenacious D!

Take the individual charm and hilarity that David Milchard and Ken Lawson each possess and elegantly smash them together with musicianship and mad improv skills. You’ll inevitably walk away with a sore jaw and belly muscles but you’ll have yourselves a divine evening of comedy. ~ Sara

David and Ken are improv comedians and spontaneous singer-songwriters that
have toured across North America, Australia and The Caribbean. They’ve also performed at comedy festivals such as: Just For Laughs, BumberShoot, Adelaide/Australia Fringe, Edmonton’s Improvaganza, and the Chicago, Seattle, Miami, Vancouver and San Francisco Improv festivals.

They’ve performed many times with Improv Legends Colin Mochrie and Ryan Stiles, from Whose Line is it Anyway fame are inspired by Reggie Watts, Marc Rebillet, Flight of the Conchords, Tenacious D & Bo Burnham

They’ve both played in many styles of bands including metal, funk, Brit pop and blues. Ken has played guitar on many solo artists albums and one of his bands once opened up for Nickelback!

You may have seen them in these TV Shows & Movies:
Altered Carbon, Supernatural, Flash, Hater’s Back Off,
You Tube’s Convos With My 2-Year-Old (125+ million views)
LouderMilk, iZombie, Adventures In Babysitting, Psych, Fringe, Sanctuary, Smallville, Arrow, Nancy Drew,
Tim Burton’s Big Eyes, Robert Redford’s The Company You Keep, The Package