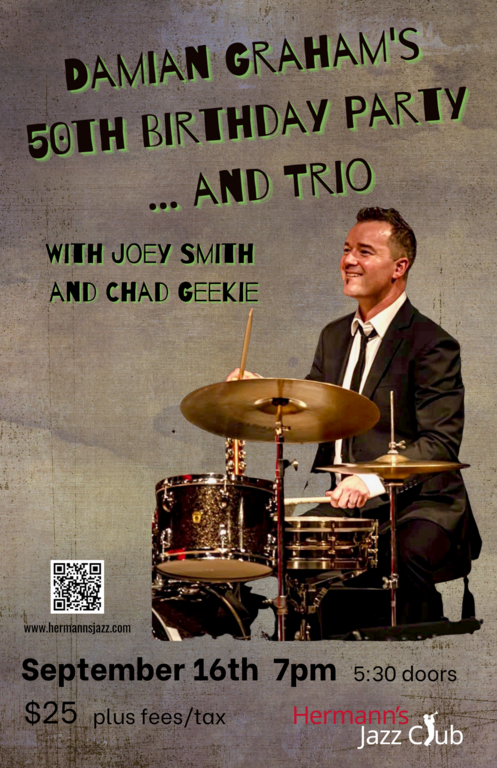 “Songs that never quite worked before reveal their inner beauty; singers take flight; instrumental solos are lifted and driven forward as If riding the back of some monstrous Pacific swell. I’ve played with some great drummers, but working with Damian is as good as It gets.”
-Alexander Varty
Arts Editor, The Georgia Straight

Graham, originally from New Zealand, has been playing drums since 1985 and has been winning over audiences ever since with his deft rhythmical drumming, fluid vocal abilities and infectious love of music for more than 20 years. A staple of the West Coast music scene, his talent have led to stints with Michael Kaeshammer, David Vest, Paul Pigat, The Paperboys, Daniel Lapp, Louise Rose and Jim Byrnes to name only a few.

Bassist Joey Smith originates from Chattanooga, Tennessee. While touring as bassist with the Glenn Miller Orchestra, Smith discovered Victoria and has since become one of the Garden City’s favourite musicians. He plays in every musical venue there is and in just as many styles.

Pianist Chad Geekie earned his Degree in Music from McGill University. One of the West Coasts hidden talents he has played with some of jazz’s finest musicians including Phil Dwyer, Benny Golson and Jamie Abersold.