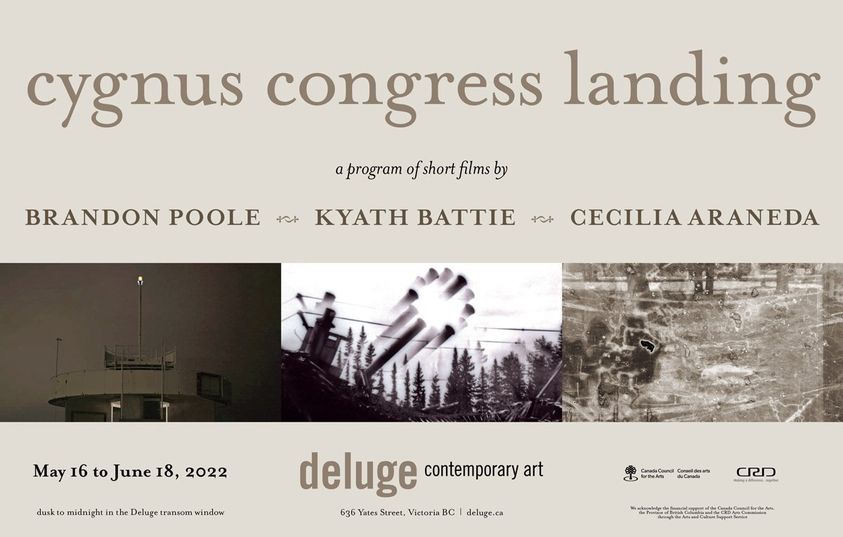 An event every week that begins at 12:00 pm on Wednesday, Thursday, Friday and Saturday, repeating until June 18, 2022

A trio of films from across Canada engaging with structural impermanence and the resilience of nature. Geographic solitude and avian society as beacons from the future of artistic imagination.

A networked planet; an improvised signal; the last swan.

Filmed on the northern shores of Lake Ontario, amid the ruined utopic architecture of Ontario Place, 𝘊𝘺𝘨𝘯𝘶𝘴 takes the geodetic-domed Cinesphere (the first permanent installation of IMAX), a sunken lake freighter turned breakwater and an invasive mute swan as subjects of its tripartite cosmic zoom.

Brandon Poole is an artist and lecturer based in Montreal. Having previously trained in journalism and philosophy, his research-based practice moves by way of interviews and fieldwork to interrogate the entwined histories and speculative futures of media, simulation and the image. He received a Master of Visual Studies from the University of Toronto and a BFA from the University of Victoria. His work has shown at the Toronto Biennial, the University of Toronto’s Art Museum, Presentation House Gallery (Vancouver), and fifty fifty arts collective (Victoria). In fall of 2023, he will present his first major solo exhibition at Dazibao (Montreal) examining the immersive real-time image and its development through a history of aviation simulation.

Kyath Battie is a filmmaker with specific interests in mysteries, landscapes and sound design ranging from the personal and observational to atmospheric explorations of space. Her work often involves large-scale viewership—creating a fine line between a “cinematic” and still photographic experience—and has been screened and exhibited internationally. Battie is an Assistant Professor in the Film Department at Cornish College of the Arts in Seattle.

Shot at Bate Island in Ottawa, landing is made from hand-processed B&W 16mm film hand-coloured with organic and photochemical tones, video and found sound. landing examines moments of respite in between flight and movement, where landing becomes refuge.