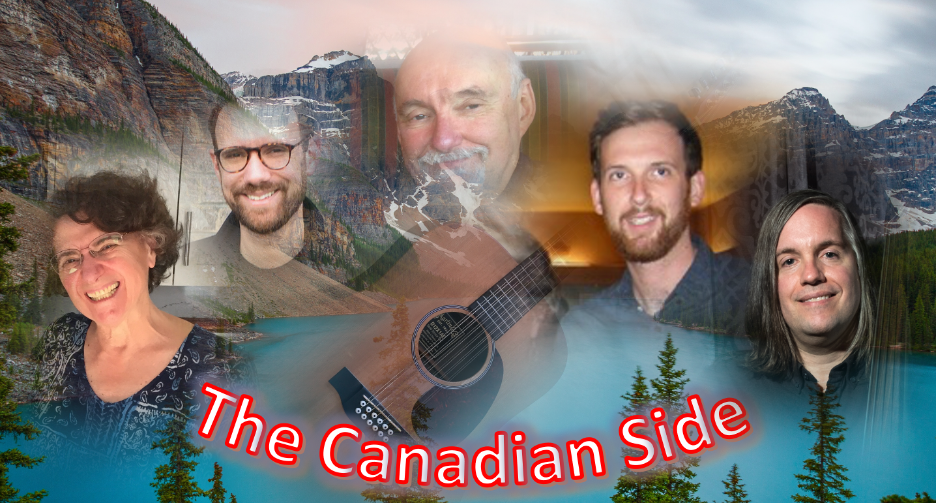 Crossing Borders:
Local musicians come together to play iconic music from both sides of the 49th Parallel. The Canadian Side plays a selection of Gordon Lightfoot’s most memorable tunes and members of Two Bobs and a Mule represent the American Side with great selections from Bob Dylan. Friends for a long time, Bob and Gord have always admired each other’s work. They have been sighted on both sides of the Border and are known for pushing other boundaries as well.

The Canadian Side:
The Canadian Side is largely a family affair coming together to interpret the songs of Gordon Lightfoot. Kevin Carter and Patrice Palmerino from the Bald Eagles sing, Lewis Carter, the original drummer for Acres of Lions drums, Elliot Carter who played guitar with The Set plays lead guitar, and Aron Bird who has played for many bands n Western Canada plays upright and electric bass. They will be joined by special guest Marc Jenkins of Two Bobs and a Mule fame on pedal steel guitar.

Two Bobs And A Mule:
Victoria’s Two Bobs And A Mule have been paying musical tribute to the songs of Bob Dylan for over 20 years. They love dropping barely-known back-catalog gems amongst the classics you’d expect to hear, and often create new and unique arrangements. Two Bobs And A Mule is often a full band, for this show they are: Lucky Budd: guitar, vocals & Marc Jenkins: guitar, pedal steel, vocals