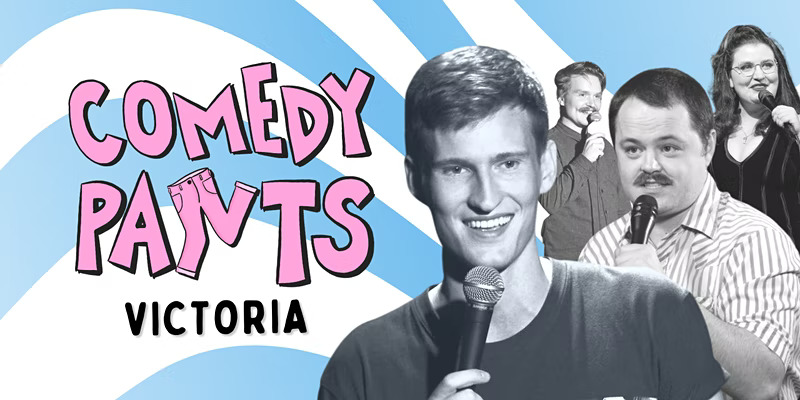 A hilarious evening of stand up comedy in an intimate, indie venue featuring performers from Just For Laughs, CBC Comedy, and more!

Hosted by Alistair Ogden (CBC Comedy, Halifax Comedy Fest) this one-of-a-kind comedy showcase is returning to Victoria before heading on a cross-country tour!

Featuring some of the best stand-ups, touring headliners, and sketch performances in British Columbia, Comedy Pants is the Vancouver comedy scene’s hidden gem, and now – for one night only – it’s Victoria’s too!

Join us in the comfy confines of Ollie Quinn in Market Square – a glasses store during that day that will transform into an incredible venue on July 22!

This show will sell out, so get your tickets ASAP.

Alistair Ogden & An-Te Chu established Comedy Pants in 2018 as Vancouver’s new home for great stand-up and sketch at China Cloud Studios. Their goal is to build as much inclusivity, community, and laughs as possible for the ~80 minute runtime of each show.

Comedy Pants has since been featured in the Just For Laughs Vancouver “Best of the West” Series, and has gone on tour across British Columbia.

NOTE: An-Te moved to Portsmouth, England in April 2022, leaving Alistair – who has appeared at the Halifax Comedy Festival, Toronto SketchFest, and on CBC Television as the winner of CBC’s Next Up competition – to host the show on his lonesome, patiently awaiting his co-host’s return.