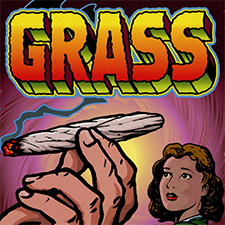 Years in the making…

 Ron Mann’s much-anticipated documentary presents a humorous and surprisingly balanced history of recreational MARIJUANA use in the late 20th century.

Those who remain pure will see the degradation you’ve been missing. Those who have succumbed to temptation will learn how a nice person like yourself became a dangerous criminal.

 Marijuana is the most controversial drug of the twentieth century. Smoked by generations of musicians, students and workers to little discernible ill effect, it continues to be reviled by the vast majority of governments around the world. With his new film, Grass, veteran filmer Ron Mann brings his impeccable historical facility and story telling skills to recount how a relatively harmless drug has been demonized for decades.

 With a rueful yet incisive script, deft editing and an impressive
soundtrack featuring original songs by Mark Mothersbaugh and a veritable pot-pourri of tunes ranging from the Swing Era’s “Reefer Man” through Dylan’s “Rainy Day Women” to the hippie lament “One Toke Over The Line,” Ron Mann’s Grass boasts extraordinary production values. Funny yet political, Grass charts the terrible loss in imprisoned lives and billions of dollars wasted fighting a drug that refuses to go away.