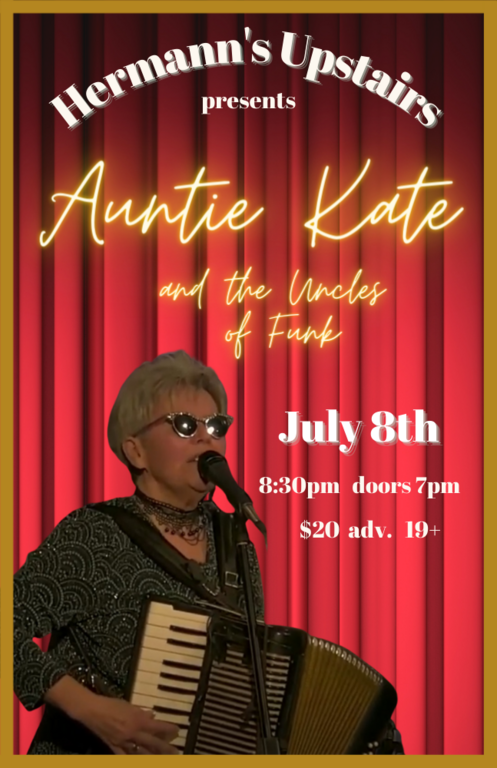 Auntie Kate & the Uncles of Funk

Rising out of the ashes of a west coast R&B band called Club Mongo, a singer, who was to become known as Auntie Kate, and guitarist, Tom Bowler, started a new band. The group formed in 1991 and consisted of Auntie Kate, Tom Bowler, and Clark Brendan. Auntie Kate and the Cheap Suits leaned on the acoustic blues and featured stand bass, accordion, guitar, and of course, flamboyant matching suits.

In 1994, a desire to get back to the electric blues, resulted in the dissolution of the Cheap Suits and the formation of Auntie Kate and Small Potatoes. This group was short-lived but was the nucleus of future Auntie Kate endeavours. Former Club Mongo bassist, Doug “Buffalo” Saunders rejoined Kate and Bowler and would remain a member on and off to this day. Joby Baker was the drummer and Tim Boss played B3 organ.

1995 brought about the creation of the first CD. The band went into the studio and the result was, “Food For Thought”. It was produced by Joby Baker, who would go on to produce albums for many notable Canadian acts. The band comprised of Auntie Kate, Bowler, Buffalo Saunders, and Baker but would also include some of Vancouver’s finest session players. One of these was the late great Robbie King who would play with the band on a number of occasions, especially when the band would play the venerable “Yale Hotel” in Vancouver.

Immediately following the release, Kate and Bowler teamed up with a Nanaimo outfit that was on hiatus called Rubber Soul. This marked the beginning of Auntie Kate and the Uncles of Funk. Phil Wipper was back powering the rhythm section. He was joined by Ken Scardina on bass, Joel Spillette on keys, Brock Miller on sax, and Colin Perry on baritone sax. The band went into the studio with engineer Rick Salt and recorded a number of songs, “Never Been Rocked Enough”, “Think”, “Trading Post”, “Cash Talking” and “I Can’t Stand the Rain”, none of which saw the light of day until “Aunthology” was released in 2008.
During this time a live CD, “Snapshots”, (produced by Bowler), was released instead. Buffalo was back on bass, Kyle Burrows replaced Colin and the only female uncle, Tina Jones, joined the horn section on trumpet. A video of “Better than good” was made and received extensive play on video channels internationally.

Constant touring brought other changes to the Uncles of Funk and in 1996 another CD, “Do You Have This In Blue?” was recorded in Calgary but this time the Uncles were made up of a group of talented players from that city. Tommy Knowles, who had been a long time member of Long John Baldry’s band, was the bass player for this recording and many Auntie Kate projects to come. The CD was produced by veteran bluesman Tim Williams and represented a straight ahead blues approach. Donald Ray Johnson (A Taste of Honey) played drums and Ron Casat (Amos Garrett) played organ as well as Bowler on guitar. Some of the songs on this CD have been played on the Galaxie Cable Blues station to this day!

Years of touring had taken their toll and family and personal concerns limited the amount of traveling that Kate and the Uncles achieved for a number of years. Actually, the price of gas tripling, and wages not so much didn’t help!