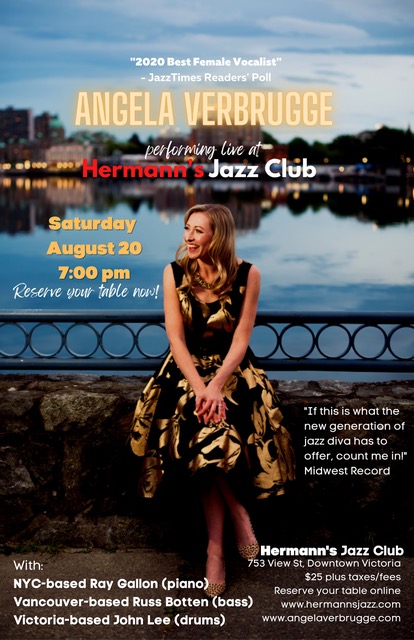 Angela Verbrugge first caught listeners’ ears in 2019 with what JazzTimes described as her “captivating debut” album recorded in NYC, and she went on to win the 2020 JazzTimes Readers’ Poll for best female jazz vocalist. The magazine’s review describes that Angela, who takes inspiration from vintage musicals, the swing era, blues, and bebop, has “conspicuously good taste”. In the last 12 months, she released her sophomore album, Love for Connoisseurs, a project consisting entirely of original lyrics for songs in the style of classic jazz and bebop standards. She toured the project across Canada, Germany, and performed at the top jazz clubs in London and Istanbul. Toronto Music Report writes that she is “a gem of a vocalist who makes all her chosen material sound magical.” Her song-writing collaborations have received features in JAZZIZ Magazine, and she has been positively reviewed by major publications including JazzWise in England. JazzWeekly describes the former actress as “fun and quirky, hip and a hoot, wispy and romantic; she slithers and oozes, and cleverly swings.”

Her trio for this special evening features her frequent songwriting collaborator and the pianist from her first album, NYC-based Ray Gallon. Ray has been a mainstay of the New York City jazz scene for over 30 years. In addition to recording for Cellar Records leading his own trios, he’s performed and/or toured with many of the legendary jazz greats including Lionel Hampton, Chaka Khan, Sheila Jordan, Jon Hendricks, Ron Carter and George Adams. He recently recorded his second album as a leader with Ron Carter and Lewis Nash. Ray has appeared at all the top clubs in NYC (such as the Vanguard, Blue Note, Smalls, and Birdland), as well as at leading festivals and clubs around the world. Bassist Russ Botten learned his craft from artists including Don Thompson, Ray Brown and John Clayton. He has toured with Diana Krall, Renee Rosnes, Clark Terry, Ernestine Andersen, and many others. Drummer/multi-instrumentalist John Lee graduated from Berklee College of Music in Boston in 2016 and has gone on to establishing himself as a prominent jazz musician first in Victoria and Canada. His debut release as a leader on Cellar Records is enjoying a place on top Spotify playlists, and garnering rave reviews.