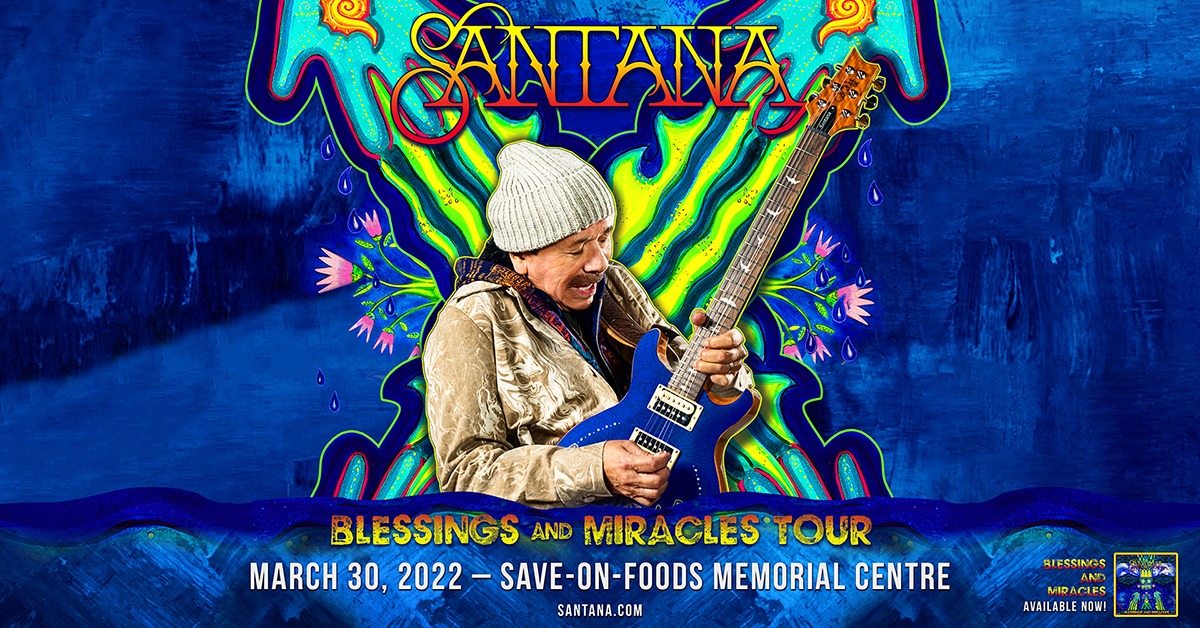 An Evening with Santana – Blessings And Miracles Tour

Carlos Santana to Celebrate His Career-Spanning Hits, From Yesterday, Today and Tomorrow on the Blessings and Miracles Tour in March-April 2022

Rock and Roll Hall of Fame guitarist Carlos Santana has announced he will hit the road with his band across North America in Spring 2022 for the Blessings and Miracles tour. On the 15-date run, Santana will perform high-energy, passion-filled songs from their fifty-year career, including fan favorites from Woodstock to Supernatural and beyond. The band (which features Santana’s wife, Cindy Blackman Santana, on drums) will also perform songs from the 2021 Blessings and Miracles release.

The Blessings and Miracles tour begins on March 25 at Toyota Center in Kennewick, WA and will make stops in Boise, Eugene, Victoria, BC, Missoula, Omaha, Kansas City, and more before it concludes on April 16 at Soaring Eagle Casino & Resort in Mt. Pleasant, MI.

With his latest release Blessings and Miracles, Santana delivers one of the most ambitious, inspired, and flat-out magical records of his storied career. There are genre-bending, hook-filled celebrations featuring Rob Thomas, Chris Stapleton, G-Eazy, American Authors and Ally Brooke, and thrilling feats of bravura musicianship that pair the guitar master with fellow icons like Chick Corea and Steve Winwood, and knockout rockers with Metallica’s Kirk Hammett and Living Colour’s Corey Glover, among others.

Delivered with a level of passion and soul equal to the legendary sonic charge of his guitar, the sound of Carlos Santana is one of the world’s best-known musical signatures. For more than four decades—from Santana’s earliest days as a groundbreaking Afro-Latin-blues-rock fusion outfit in San Francisco—Carlos has been the visionary force behind artistry that transcends musical genres and generational, cultural and geographical boundaries.

Listen to Blessings and Miracles HERE

For more than five decades – from Santana’s earliest days as a groundbreaking Afro-Latin-blues-rock fusion outfit in San Francisco – Carlos Santana has been the visionary force behind artistry that transcends musical genres and generational, cultural and geographical boundaries. To date, Santana has won ten Grammy Awards and three Latin Grammys, with a record-tying nine Grammys for a single project for 1999’s Supernatural (including Album of the Year and Record of the Year for “Smooth”). He has received the Billboard Century Award (1996), was ushered into the Rock and Roll Hall of Fame (1998), received the Billboard Latin Music Awards’ Lifetime Achievement honor (2009), and was the recipient of the Kennedy Center Honors Award (2013). Among many other distinctions, Carlos Santana has been cited by Rolling Stone as #15 on their list of the “100 Greatest Guitarists of All Time;” and has joined the Rolling Stones as one of only two bands to have an album reach the Top 10 in every decade since the 1960s. In 2018, he released his first MasterClass, and recently celebrated three epic milestones – the 20th anniversary of his groundbreaking album Supernatural, the 50th anniversary of his legendary performance at Woodstock, and the 50th anniversary of his masterpiece Abraxas. His most recent album, the powerful, energy-infused Blessings and Miracles (2021) features collaborations with Rob Thomas, Chris Stapleton, Steve Winwood, and many others. Santana will continue his residency at the House of Blues Las Vegas in 2022.